Let’s pretend you have hundreds of millions of dollars sitting in the bank and you want to start a new NBA franchise today. What player would you pick to build this team around?

Who would be the face of your franchise?

I am a Lakers fan, and realistically I would not pick Kobe Bryant today to be that guy. Probably 12 years ago I would, but not today. Neither I would pick Lebron, Carmelo, or Durant.

Here I will explain to you who would I pick based on statistics with a little sprinkle of reality in the middle.

Let me first define the metrics I am using to analyze each player (based on the 2013-14 season):

I have also decided to use three advanced statistics metrics because I believe they will be able to better define how effective each player really is:

There is some controversy regarding the PER, because this metric is largely an offensive one, since it only takes into account two defensive statistics – blocks and steals. And since it is a “per minute” metric, it might show distorted numbers, because it cannot measure when one is playing against the other team’s second unit. However, since I am analyzing players of similar quality (all starters) and of similar minutes, this should not present a problem.

According to a study done by Dave Berri – professor of economics at Southern Utah University – players in the NBA are at their best when they reach 24 years of age and stay that way until 25, then start declining. Of course, this is not the same case to all players, such as Jordan who won all his titles after the age of 28.

However, since I am assuming that there will be no anomaly in this sample, I have picked the top 8 players under the age of 24 in the NBA today that I believe could potentially serve as a good first building block. Assuming that every thing else is perfect – that you have a great coaching staff and you are the GM of this team – picking players this young and already established would attract other key players to play for your team.

From looking at the data above we can conclude a few things right off the bat:

With that, who would be the best pick to build a franchise around today?

Taking into consideration that Davis, Irving and Cousins did not play for playoff teams last year, it is easy to understand why they put up such big numbers. They were the star of their teams and got a lot of the offense going through them. 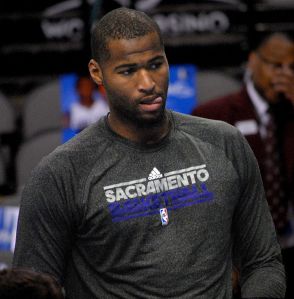 Wall, Lillard and Thompson played for teams that were strong playoffs contenders. Although Golden State did not get past the first round, they were still a pretty strong team, finishing 3rd in the highly competitive Western Conference. Lillard proved himself by beating the Rockets with a last second shot taking his team to the second round for the first time in years. Wall, in the other hand, managed to lead his team to the second round of the weak Eastern Conference playoffs by beating the Bulls. All three of these players have proved to be a critical part of their team’s success, but none of them ever got past the second round.

Finally, George and Leonard were part of championship contending teams. Indiana dominated the East but came up to when they lost to the stacked back-to-back NBA champions Miami Heat. Leornard’s Spurs won the title and he had a breakout season by winning the Finals MVP. His performance during that Finals took a lot of people by surprise when he showed the tip of the iceberg of his upside potential.

If I had the chance to take any single one of these guys today I would. But if I had the privilege to pick, I would go with… 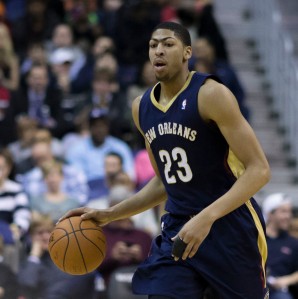 The hype about this guy is real. His stats are right up there among the best players in the NBA. On the 2014-15 season opener he had 9 blocks – the first player to ever do that in a season opener since the 1974-75 season. He is currently in the top 10 in points, rebounds, blocks, and steals in the league.

Considering that NBA MVPs generally have a PER of above 27.5 (Jordan has a career PER of 27.91), on his second season he recorded a PER of 26.5 – considered to be a “weak” MVP contender.

He finished in the top 5 in double-doubles recorded in the league in the 2013-14 season, with an average of 20.8ppg and 10rpg at the age of 19. Plus, the kid can shoot the ball from 18 feet with consistency.

Taking into account that he has won an Olympic gold medal in 2012 and another gold medal in the 2014 FIBA World Cup with the USA National Teams all before the age of 21 adds even more credibility to his curriculum.

He has an immense wingspan of over 7’7″, what makes it understandable why he blocks so many shots, gets so many steals, and grabs so many rebounds.

And, on top of all of that he has proven to be extremely coachable and professional at such a young age.

The sky is the limit for AD, and if he continues on this pace he will certainly become one of the best centers/power forwards to ever play the game.

With that, he would be my pick to be the face of my newly formed franchise, as he would also easily attract other key players to join the team.

I will leave you with a few of his highlights. Enjoy.

Throughout all these years, the Tim Duncan Era Spurs have shown to be one of the greatest teams that was ever put together.

Since the 1997-98 season, with the hiring of Greg Popovich as the head coach, the San Antonio Spurs have never had a season with less than 50 wins (with the exception of the 1998-99 season, which was short due to a lockout – Spurs were 37-13). In other words, they have not finished outside of the Top 2 spot in their conference for over 17 seasons. And have won 4 championships so far.

They have had great players such as David Robinson, Tim Duncan, Tony Parker, and Manu Ginobili to name a few. But in my opinion, the greatest star on that team is Greg Popovich. The stats don’t lie. It is clear that with his arrival he brought with him an amazing culture of greatness and discipline.

Most people don’t enjoy watching the Spurs play. But, again, most people do not understand basketball that well. San Antonio has played the perfect team basketball for over a decade. Their plays are perfectly ran and their defense is other teams’ biggest fear. It is hard to find a flaw in how they play the game. They don’t take the shots that other teams give them; they take the shots that they want to take.

This is a championship basketball approach. How can you beat a team where they have a 12 man rotation, and their level of play never declines even when the bench is on?

Also, the Spurs don’t buy teams, they build teams. They have kept the same players foundation for years, and still manage to compete with the Big 3’s and “Super-Teams” all over the league.

Here’s a clip of how polished they look when they step on the court.

Now, let’s talk about the Thunder.

Since Scott Brooks took over the head coach position in Oklahoma in the 2009-2010 season, the Thunder have had 4 seasons with 50 or more wins.

The Thunder have 2 superstars that, in my opinion, have both been in the Top 5 MVP list for a few years already. Westbrook is arguably the second most athletic player in the league (only behind Lebron James), and Kevin Durant is the best scorer in the league hands down.

Serge Ibaka is a tremendous athlete, as well, but lacks basketball IQ. Kendrick Perkins is one heavy block of muscle that sits in the paint. And Tabo Sefalosha is a great on ball defender.

Their bench, however, is not very deep. Maybe 2 or 3 players are able to come in and legitimately cause an impact in the game (Reggie Jackson, Dereck Fisher, and Nick Collison).

Their offense is freelance for most of the time. Players taking turns trying to make something happen.

Eventually, Westbrook takes it to the hoop and slams it down, or KD knocks down a deep three over 3 defenders. But this is not a very reliable way to win in the playoffs.

With a small bench, KD and Westbrook end up playing over 40 minutes a game (KD played 52 minutes on game 6 of the WCF!!).

In my opinion, the Thunder will keep getting shut down deep into the playoffs every year, until they get more quality bench players to give KD and Westbrook a break.

With all of that being said, after watching this series and looking at the stats, I don’t believe there was ever a chance that the Thunder would have beaten the Spurs.

Here’s a great video that Coach Nick did about the Spurs vs. Thunder Game 6, breaking down how San Antonio absolutely handled OKC.

To be totally honest, I believe that the Spurs will beat the Heat this year. They are just too good right now to be stopped. Besides, they still have that bitter taste in their mouths after letting the championship slip through their fingers on game 6 last year. But this is a whole other story saved for another post…

Born and raised in Brazil until the age of 16. Moved to Canada as an exchange student and played basketball for Red Deer College. On third year of school transferred to the University of Calgary where he attained his B.Comm in Entrepreneurship and Innovation. Today, he works in business and writes about insights and knowledge acquired throughout his life.